Thailand (Chiang Mai, Khaem Son, Khao Yai, Aranyaprathet)
Cambodia (Siem Reap, Phnom Penh, Kratie)
Vietnam (Ho Chi Minh City -by bus)
Laos (Pakse, Thakhek, Vientiane, Vang Vieng, Luang Prabang)
Thailand (Thung Chiang, Chiang Mai)
When first planning this trip we were both going to be on Mark’s CBR 250.  Luckily he upgraded to the CBX 500 in January which meant Jenny started riding the CBR.  She enjoyed riding a bigger bike enough that we decided to take 2 bikes on the trip.  We can’t imagine what the rougher bits of the roads would have been like with both of us on the CBR!
We changed the route slightly as we went, and were glad to discover the Laos/Thai border crossing that saved a day and turned out to be a great alternative.  The biggest change was deciding not to try to drive to China.  There were several factors:  difficulty getting across the border, that motorbikes are not allowed in Kunming or on the Hwy to Dali, much colder weather and finally, that we are only permitted to have the bikes outside of Thailand for 30 days and we were already 16 days into our second permit.  We are going to fly Chiang Mai – Kunming the week we get home to finish the interviews for Mark’s research.
Posted by Mekong Motorcycle Diaries at 06:27 1 comment:

We had been thinking of putting the bikes on a slow boat to Houay Xai to avoid the dirt and gravel roads on the way to Luang Namtha that many have warned us about taking, but we decided to drive to a new land border crossing at Muang Ngeun/Huai Kon which would take us into Nan province in Thailand.  I can’t believe that we hadn’t heard of this before – it was great and only 2 days from LP-CM! (Hwy#13-4-4a in Laos)
4a was a narrow twisty mountain road with frequent patches of gravel construction that kept the speed down but the scenery was beautiful.  The last 30km was on a wide, smooth, paved road from a new coal power plant in Hongsa right to the Thai border (Thailand gets 80% of the power generated). The border was simple and small – took less than 1 hour!  Driving in Nan Province was exceptional.  Hwy#101 is a great new road with stunning scenery of rolling hills and lots of panorama views while winding along the crest of mountains.  We passed many big trucks carrying huge loads of lumber out of Laos.  We were told that it is exported by Chinese companies who then stockpile it just across the border until it is legal to take to Bangkok and then by boat to China.  Companies always find a way to evade environmental protection policy at the expense of poorer countries…so sad to see.
Stayed at Siam Garden Bungalows with hosts Dao & Marco in Thung Chiang – great place! 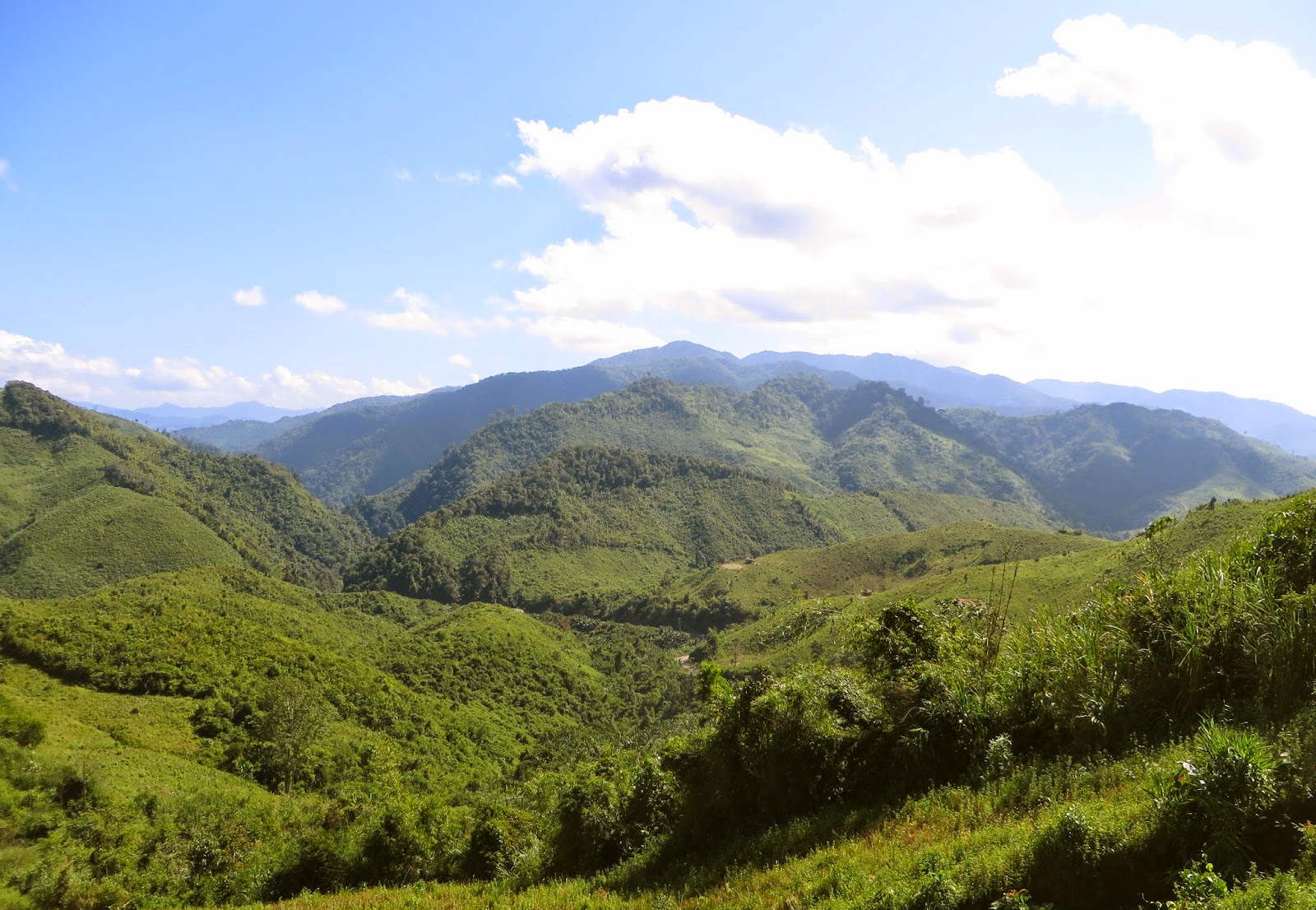 On the final home stretch today we started on twisty mountain roads in Nan Province, stopped for lunch by the lake in Phayao and finished coming in on Hwy #118 where we could finally get back up to cruising speed.  Nice to be home on our quiet little soi where everything seems to be in order.
Driving time: 6 hrs 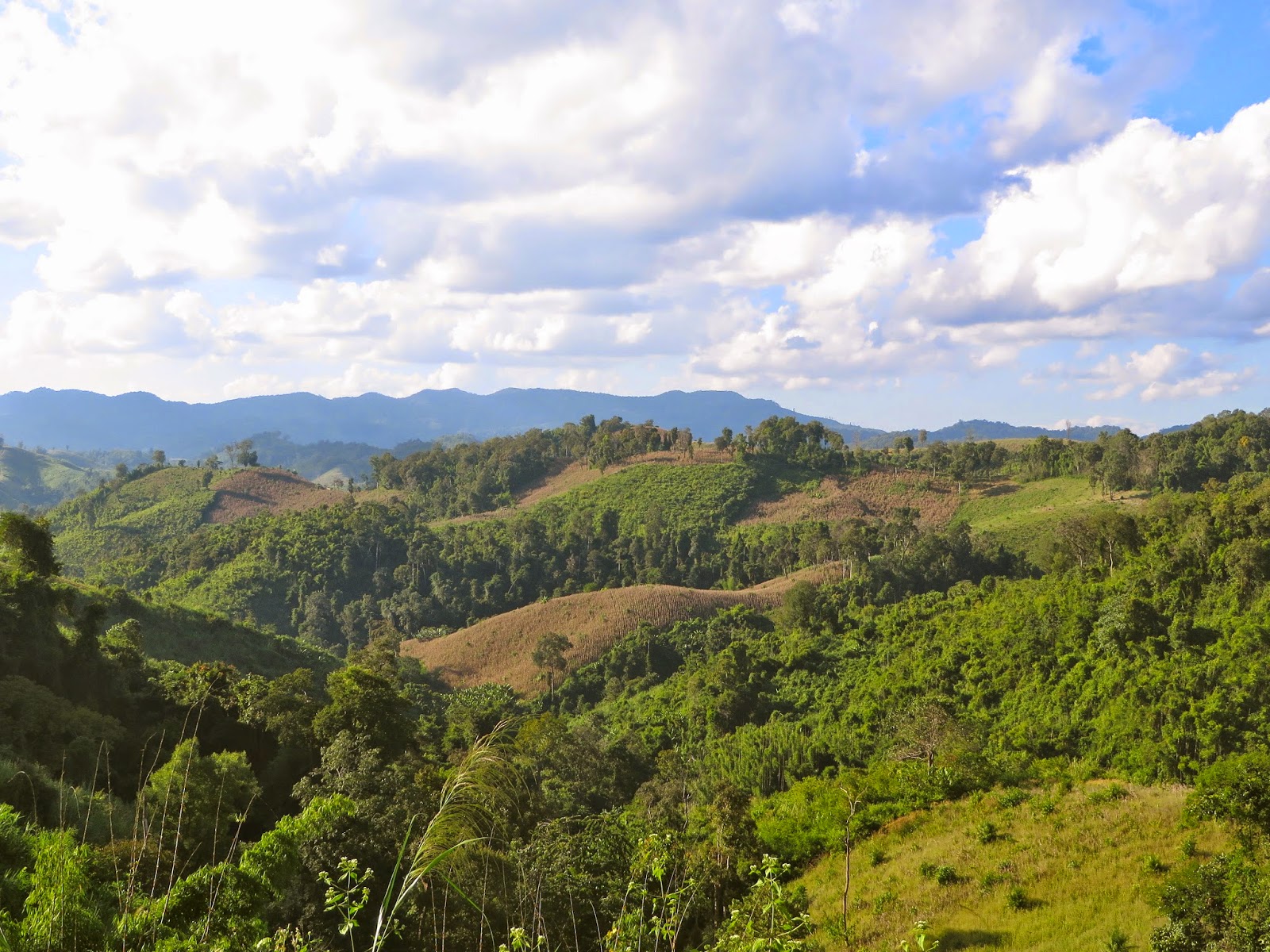 Posted by Mekong Motorcycle Diaries at 05:59 No comments: 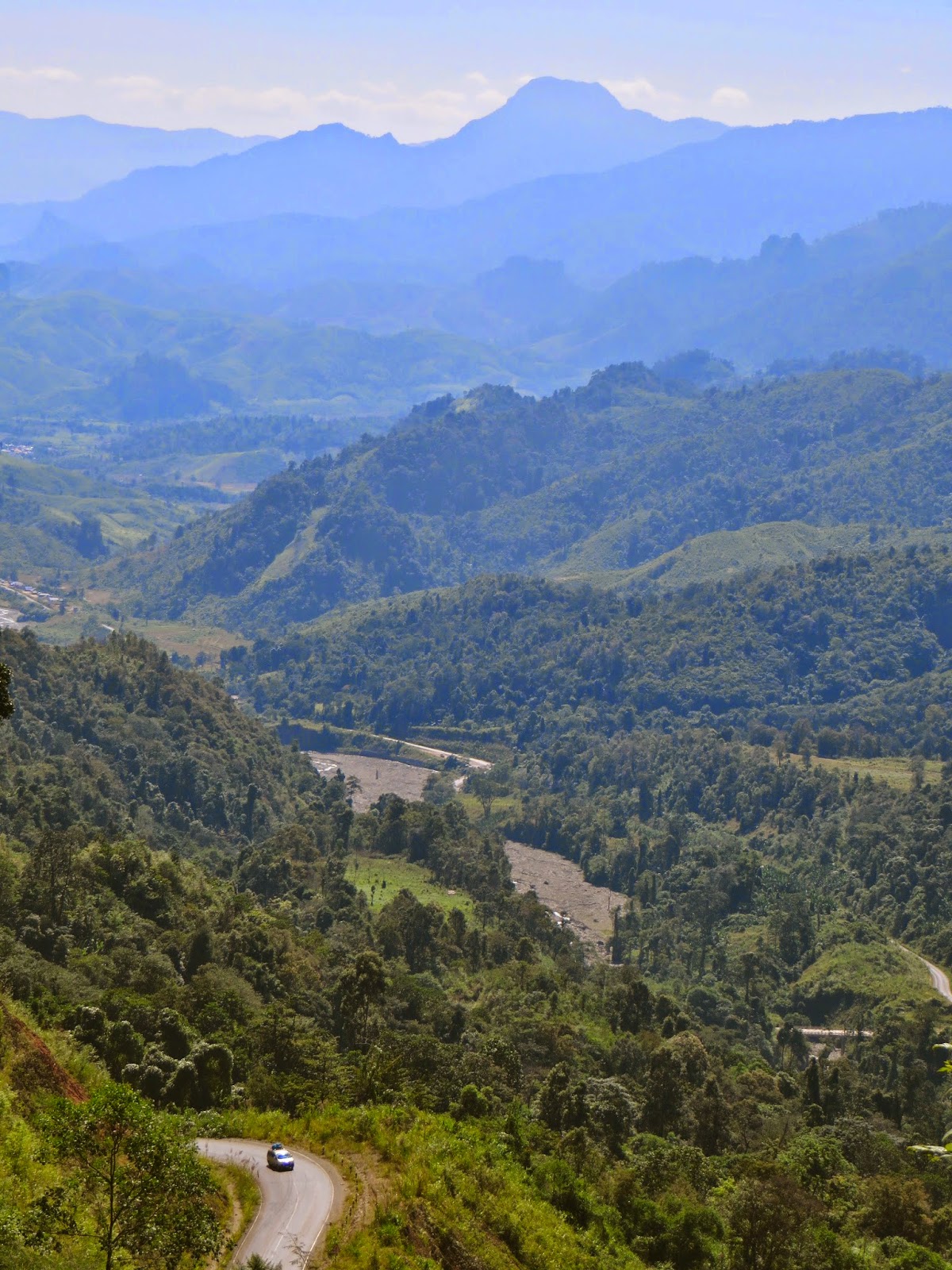 Drove to Luang Prabang through beautiful mountain scenery.  Started and ended back on #13 where there were many big potholes - both of us went right through a deep one, glad to come out the other side without tire punctures, but most of the way was on a new road. 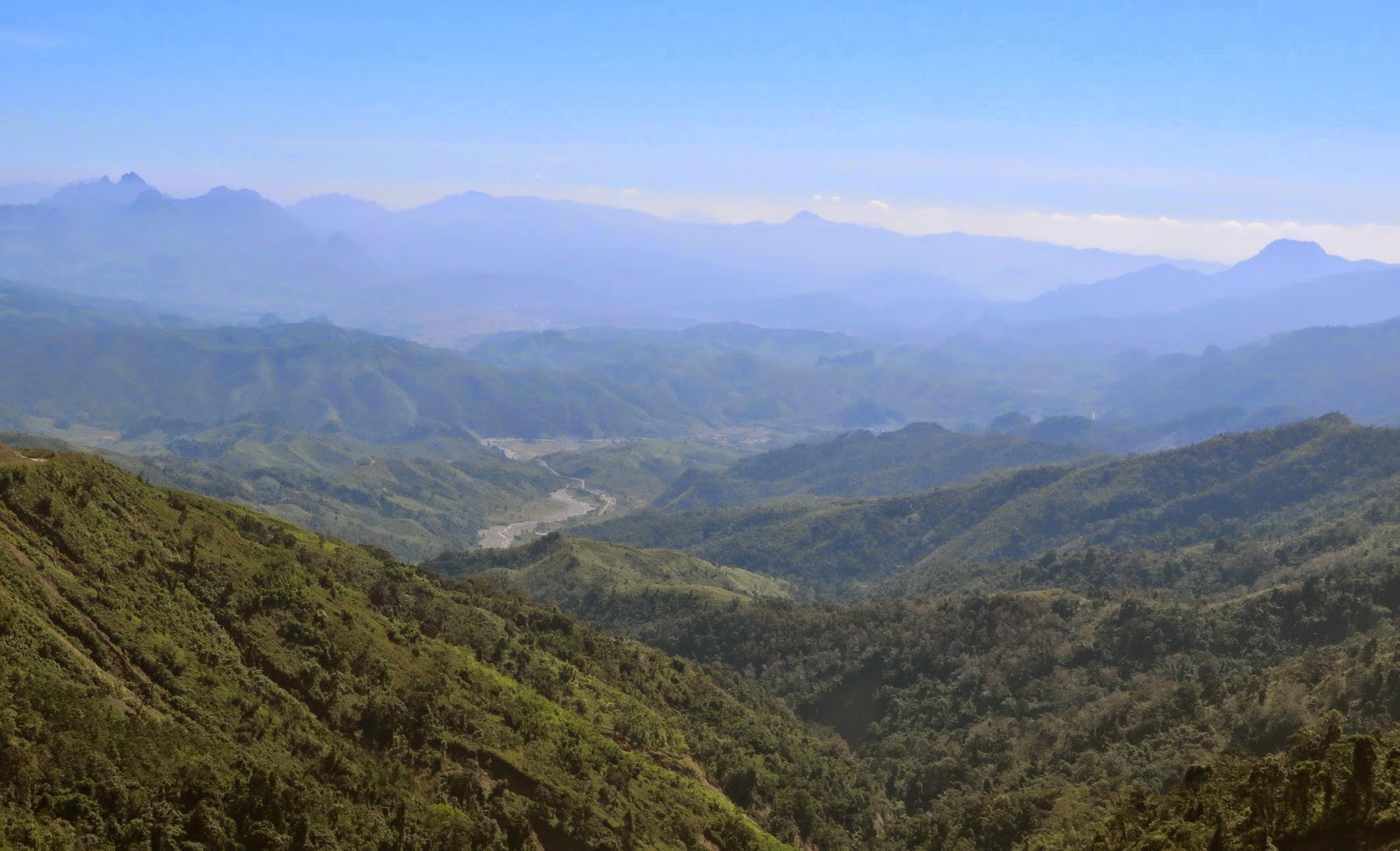 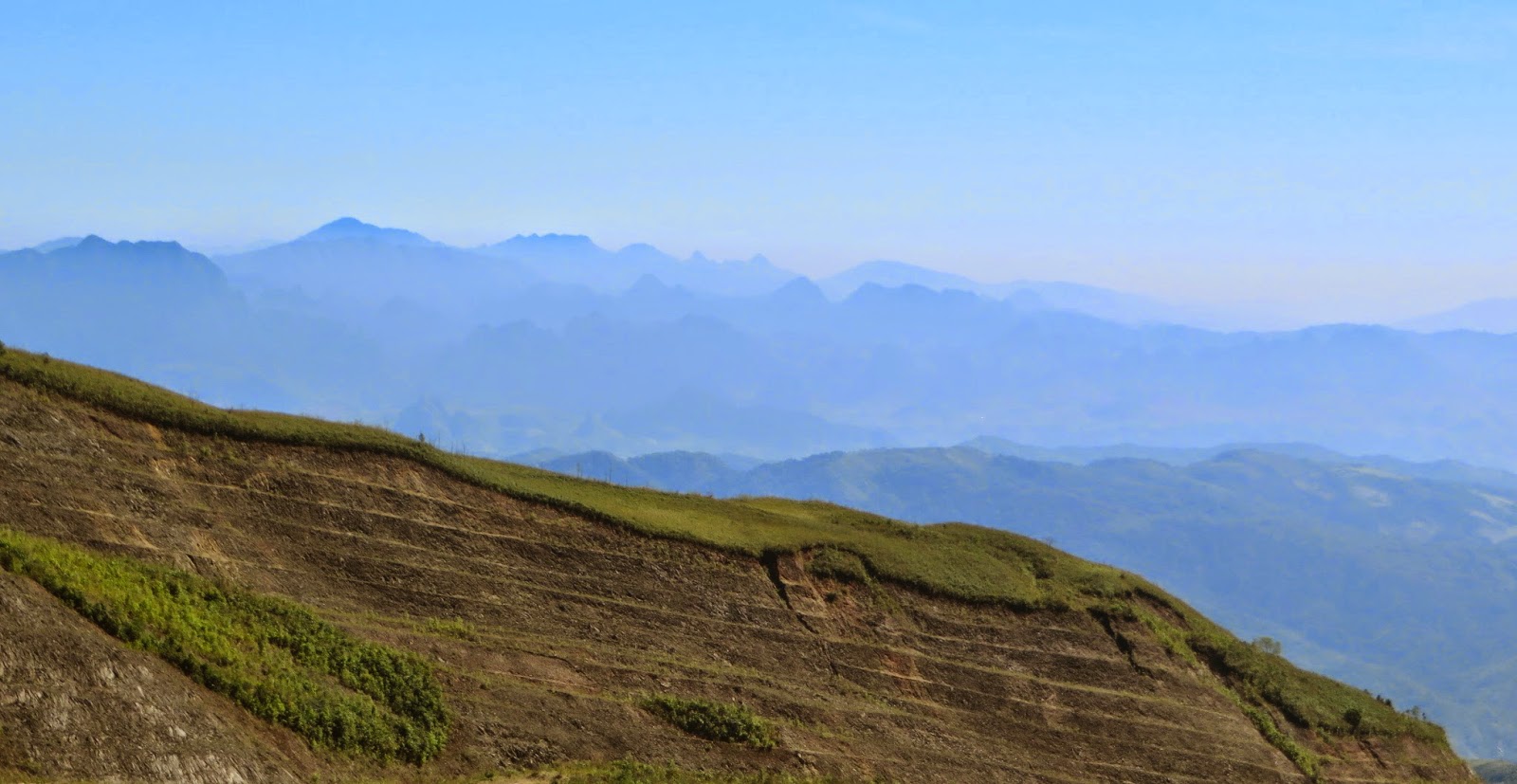 Luang Prabang is a beautiful Unesco World Heritage site with temples and monks everywhere, the Nam Khan and Mekong Rivers to the north and west, colonial buildings, cafes and restaurants that feel like you're in Europe and a big walking market every night.  Went out to the stunning Tad Kuang Si waterfall with its pools of brilliant blue water and had a swim to cool off. 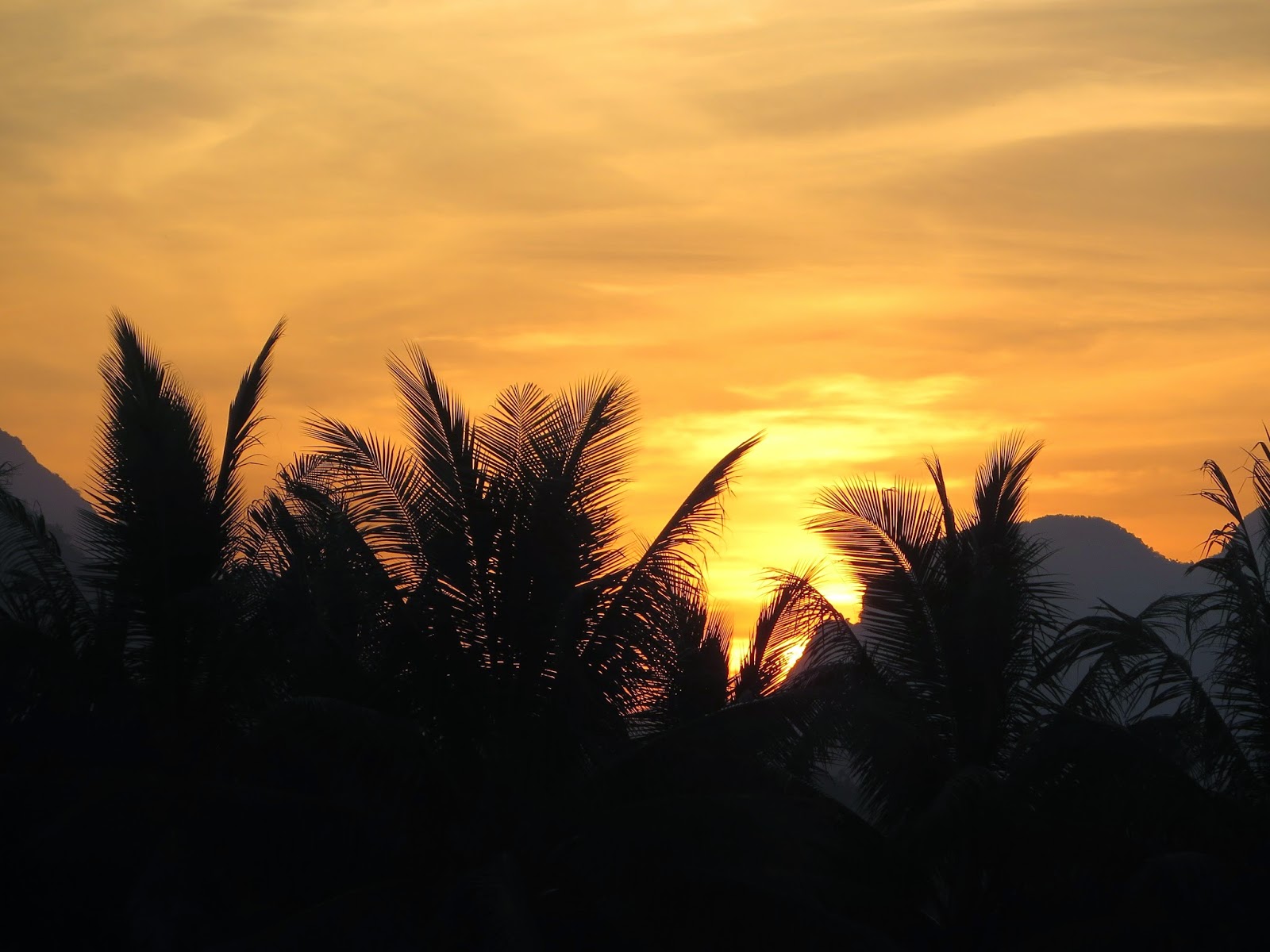 Drove to Vang Vieng today on reasonable roads, paved but lots of random potholes, getting some mountain twists and turns.  Hard to get going very fast as at any moment you may come around a bend right into a tire swallowing crater.  155km - 3 hours.

We rented bicycles and rode 7km out for a swim at the Blue Lagoon through beautiful karst mountains.  Vang Vieng has lots to offer with rock climbing, tubing and kayaking all the rage as well as being a backpacker party spot.  And yes, "Friends" is still playing at several riverfront lounge bars where patrons can buy joints, opium, mushroom tea and more.  This has been toned down and is more subtle compared to 10 years ago when we were last here and various stimulants were advertised on sidewalk signs.  The current tourist tank-top that many of the 20 somethings are wearing is: "Drink triple, See double, Act single"....kinda sums it up. 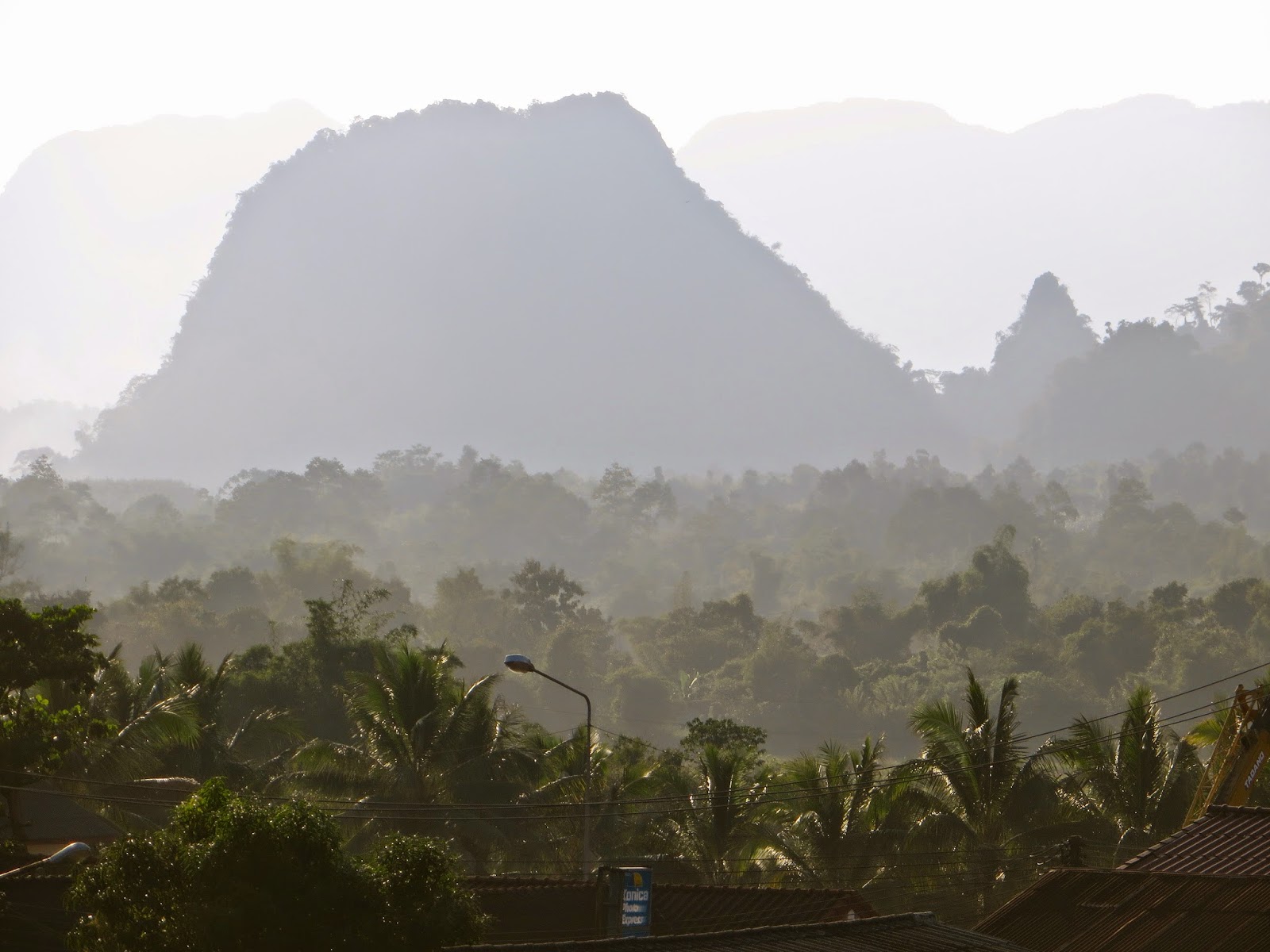 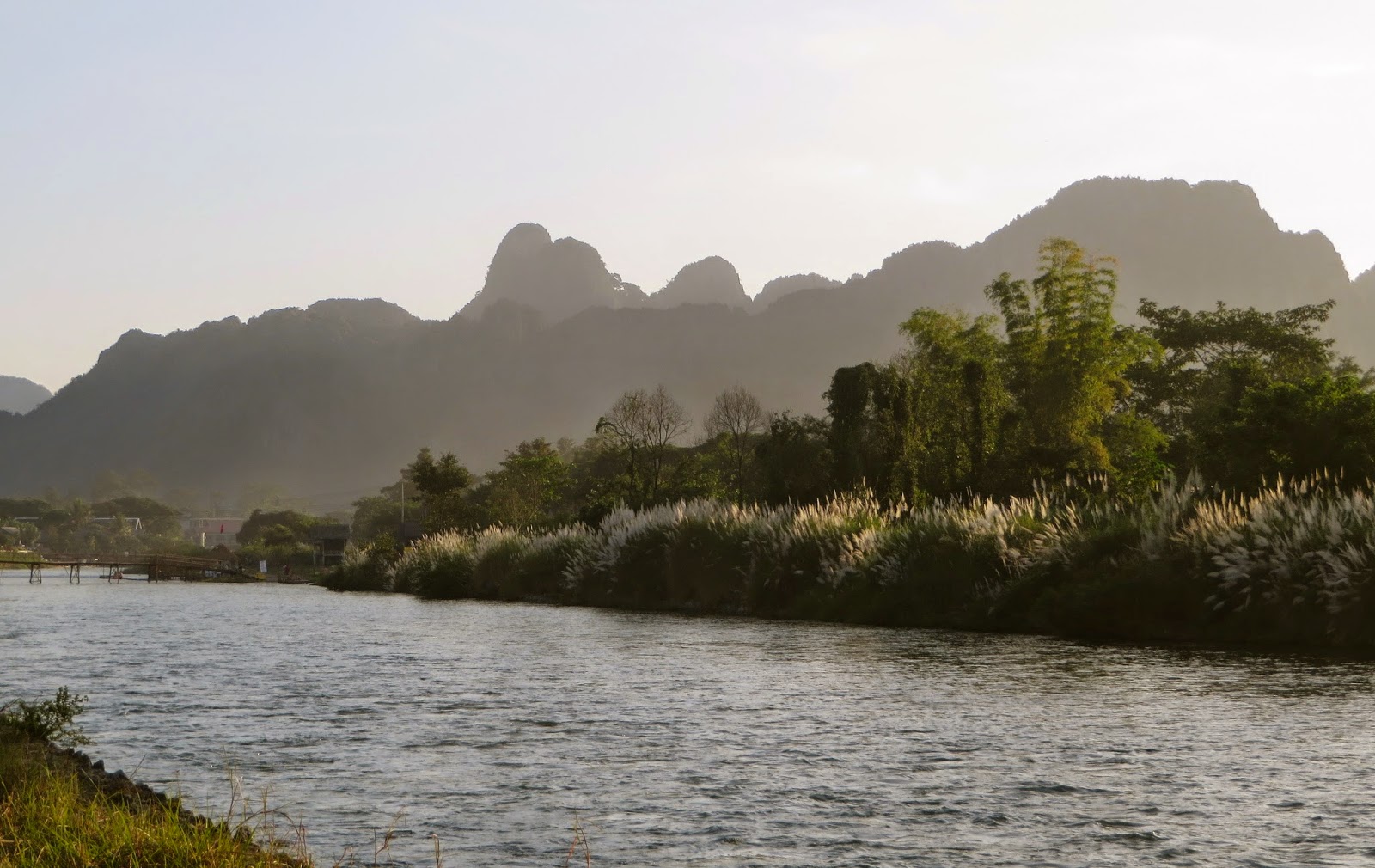 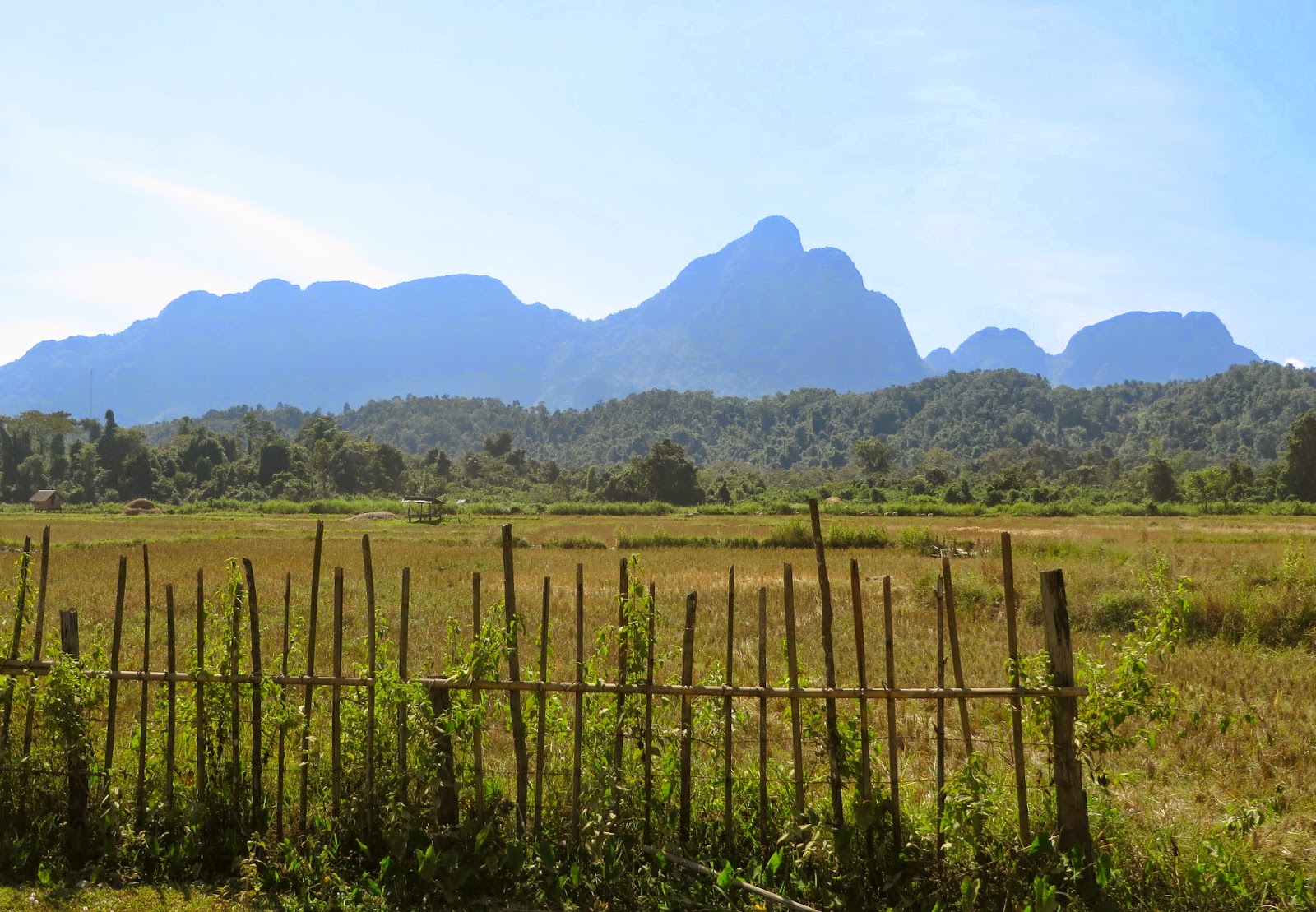 Posted by Mekong Motorcycle Diaries at 22:51 No comments:

Pleased to find Vientiane a more warm and welcoming place than when we were here last, 10 years ago, with a long pedestrian walkway and park along the riverfront and many appealing cafes and restaurants.  (This blog is mostly Jenny’s exploration while Mark was busy reading and preparing for interviews.)

Visited the Morning Market, which is mostly an indoor mall with a small outdoor market where I was appalled to see rhinoceros horns (adult & baby) for sale alongside traditional medicine herbs and various bark and dried plants.  Where are they sourcing them and who is buying them?!? Makes me angry enough to start throwing things so I joined ‘Sabai Disc’ for an Ultimate Frisbee pick-up game – always a good time.

Next, I went to the ‘COPE Visitors Centre’, alongside a Rehabilitation Centre for ambulatory needs and prosthetic limbs, that has a very well put together exhibit of how Laos people have suffered due to UXO from the US Secret War.  “From 1964-73, the US dropped more than 2 million tons of ordnance on Laos during 580,000 bombing missions – equal to a planeload of bombs every 8 minutes, 24 hrs/day, for 9 years – making Laos the most heavily bombed country per capita in history. The bombings against the Pathet Lao and along the Ho Chi Minh Trail destroyed many villages and displaced hundreds of thousands of Lao civilians. Up to a third of the bombs dropped didn’t explode, leaving Laos contaminated with vast quantities of unexploded ordnance (UXO). Over 20,000 people have been killed or injured by UXO in Laos since the bombing ceased in 1975.  Each year there continue to be over 100 new casualties in Laos. Close to 60% of the accidents result in death, and 40% of the victims are children.  The U.S. spent as much in three days bombing Laos ($51M, in 2010 dollars) than it spent for clean up over 16 years ($51M).”
http://legaciesofwar.org/about-laos/secret-war-laos/
Wow, appalling statistics of suffering that need to be talked about.

Thakhek is a chill little town on the Mekong with lots of undulating limestone karst hills, caves, grottoes and rivers between it and the Vietnam border, only 150km away.  We decided to stay here and explore for a few days as Mark has to wait until later next week for an interview in Vientiane.  While Mark was catching up on some work I drove out through the spectacular hills, went swimming in a blue lagoon, and did a whole day of fabulous rock climbing at ‘Green Climbers Home’. 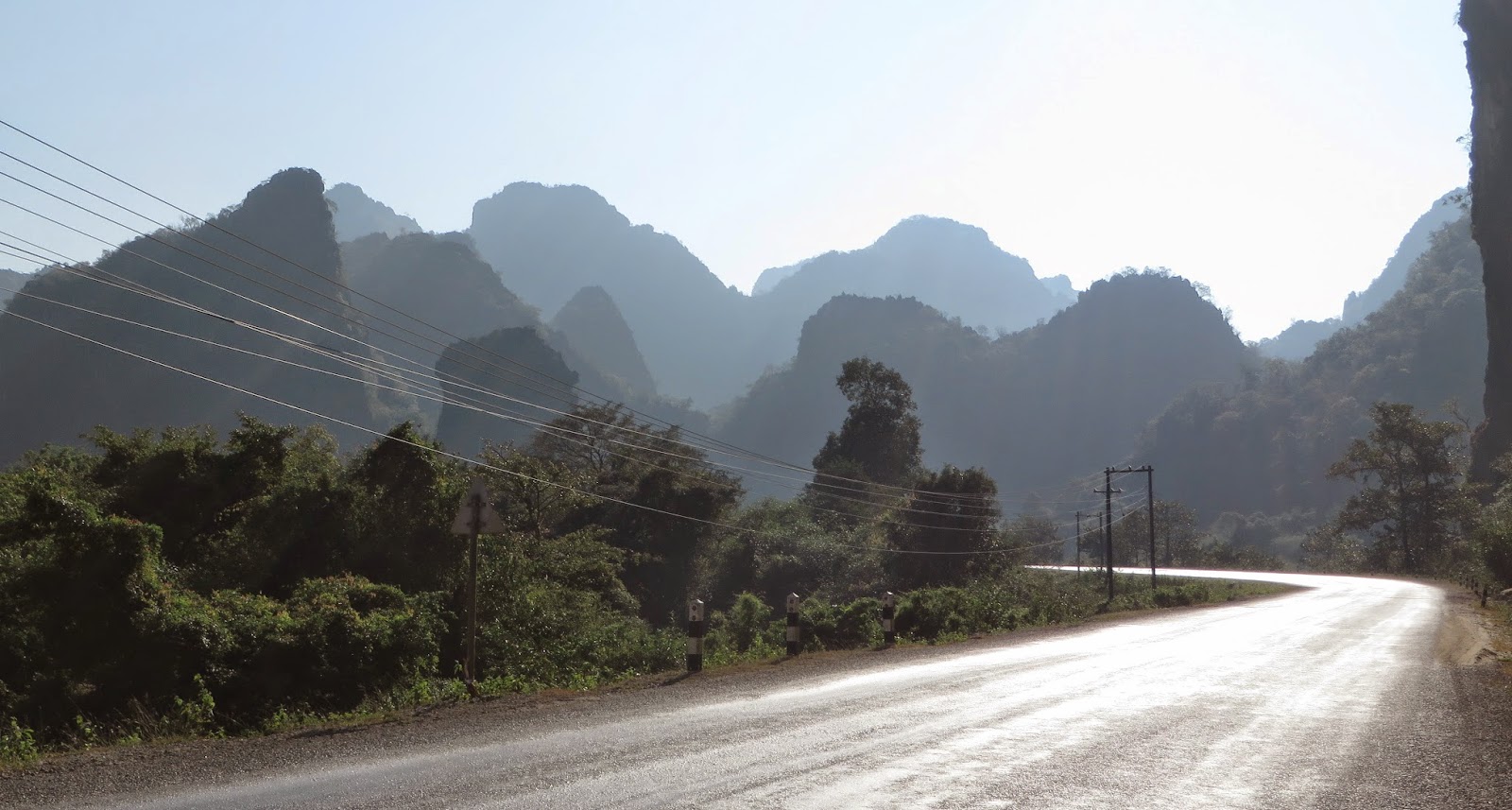 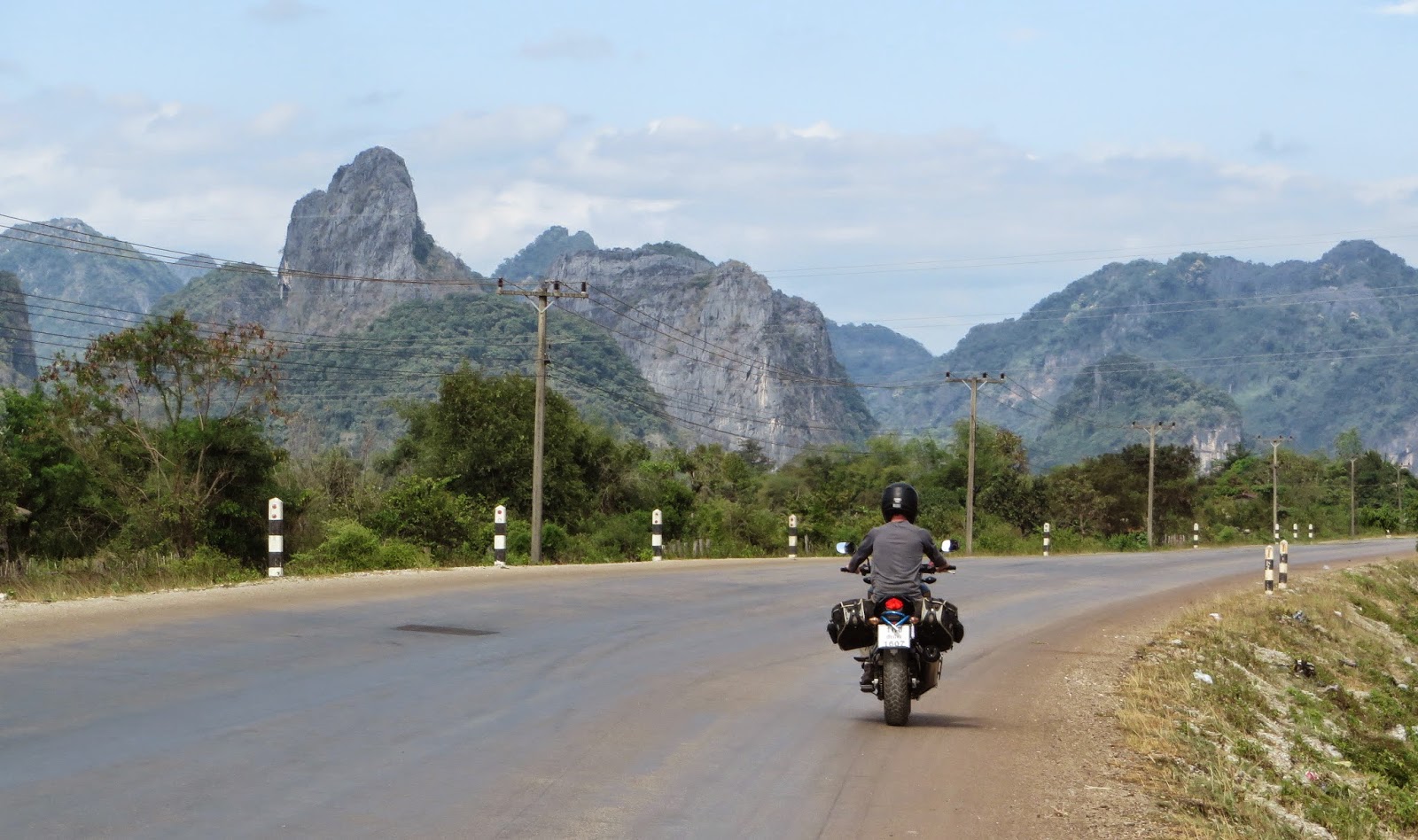 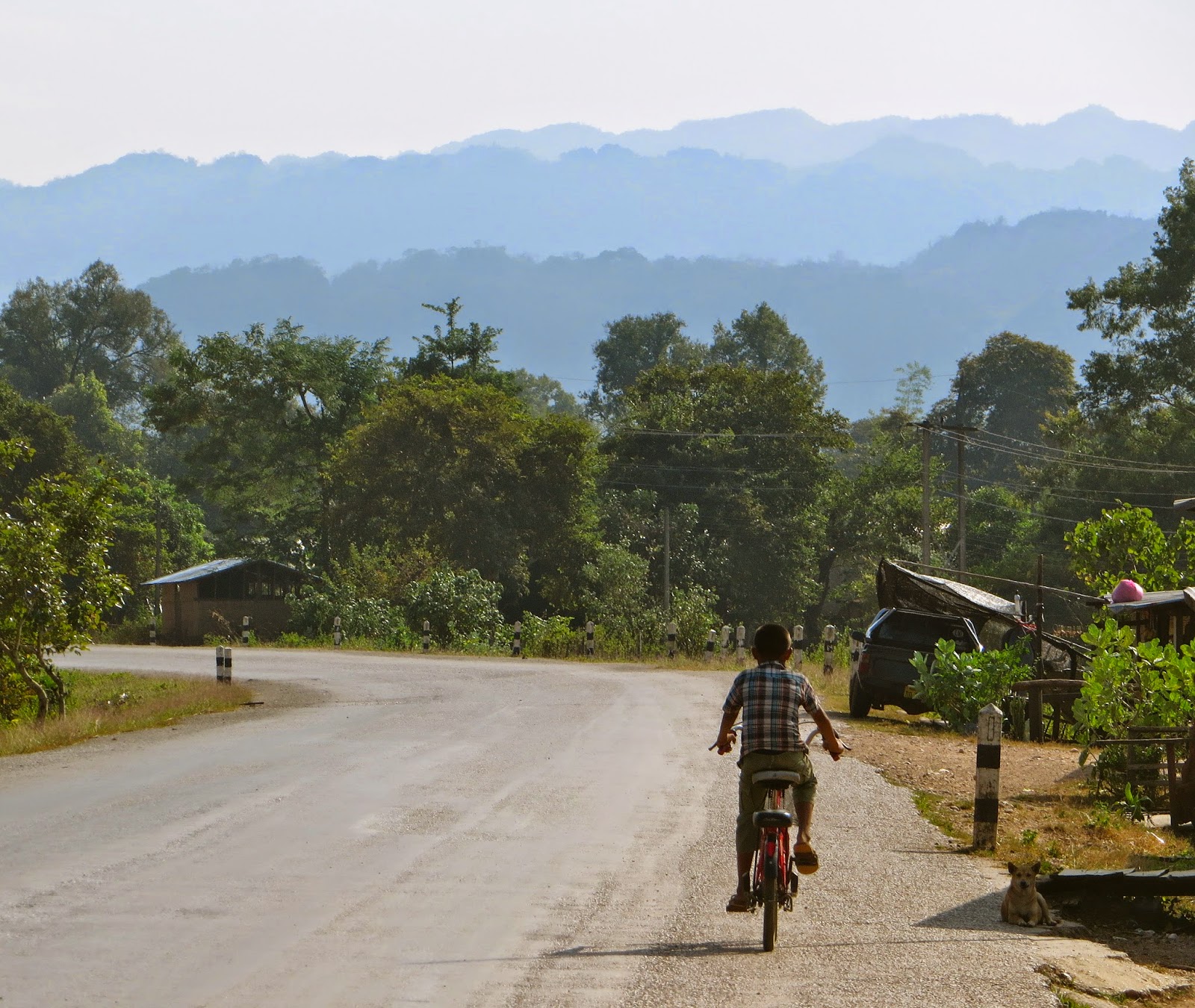 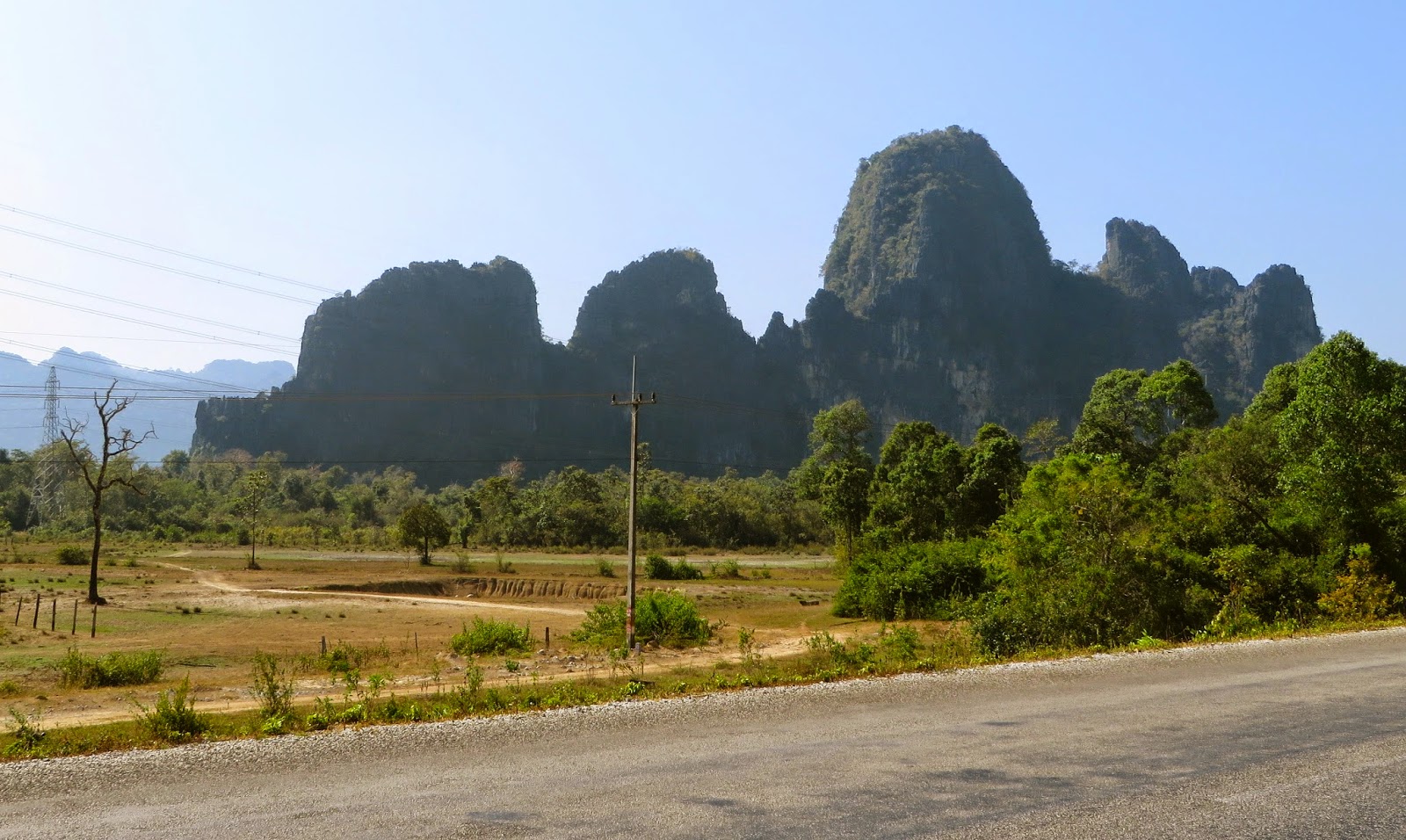 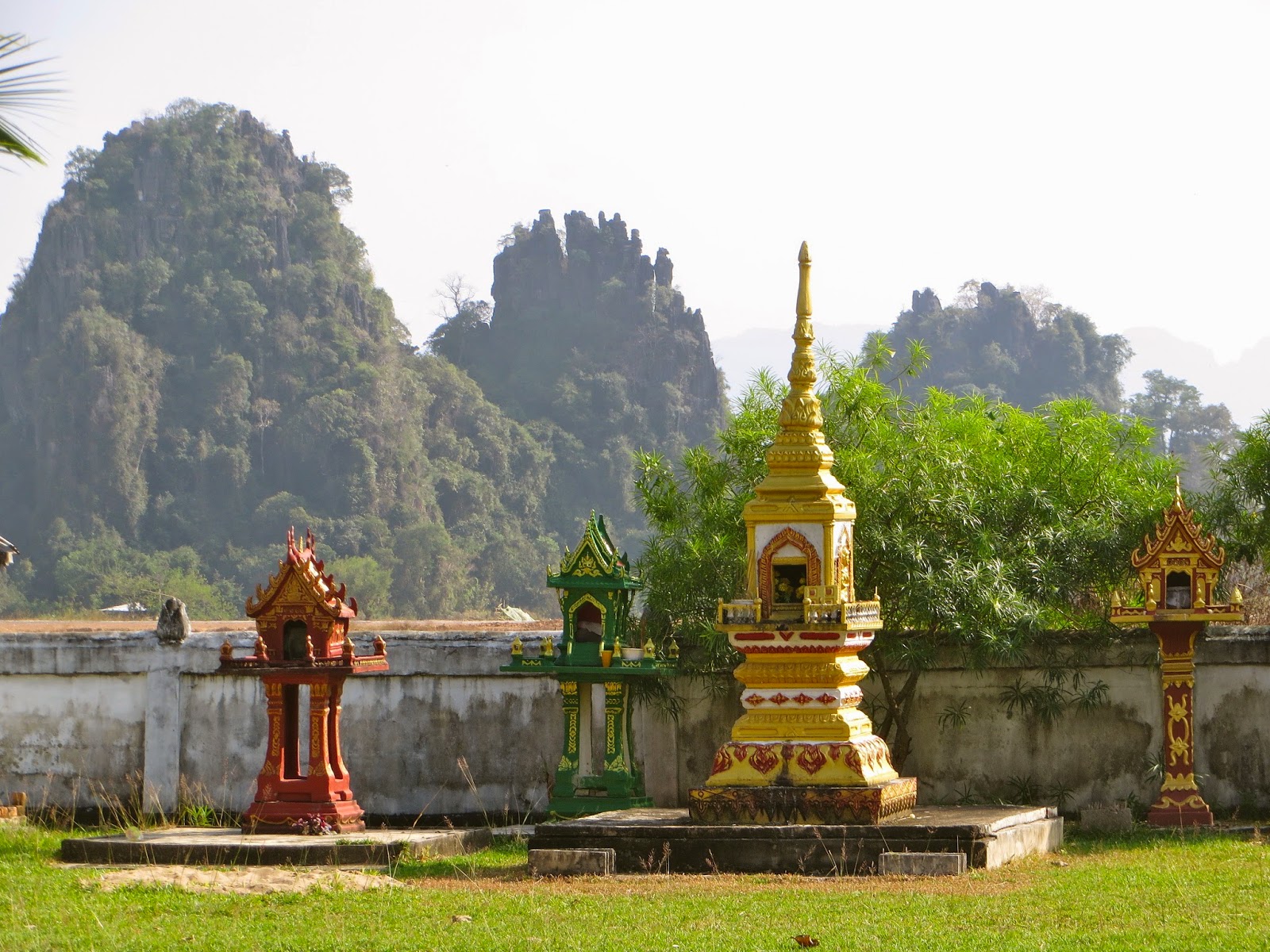 On Sunday we drove to Vientiane on great roads through the countryside.  We saw some women submerged in a pond up to their chests who were fishing with traditional Laos dip nets on bamboo poles.  Arrived in Vientiane and had a short walk along the Mekong and through town to get our bearings – lots of places to go back to later this week. 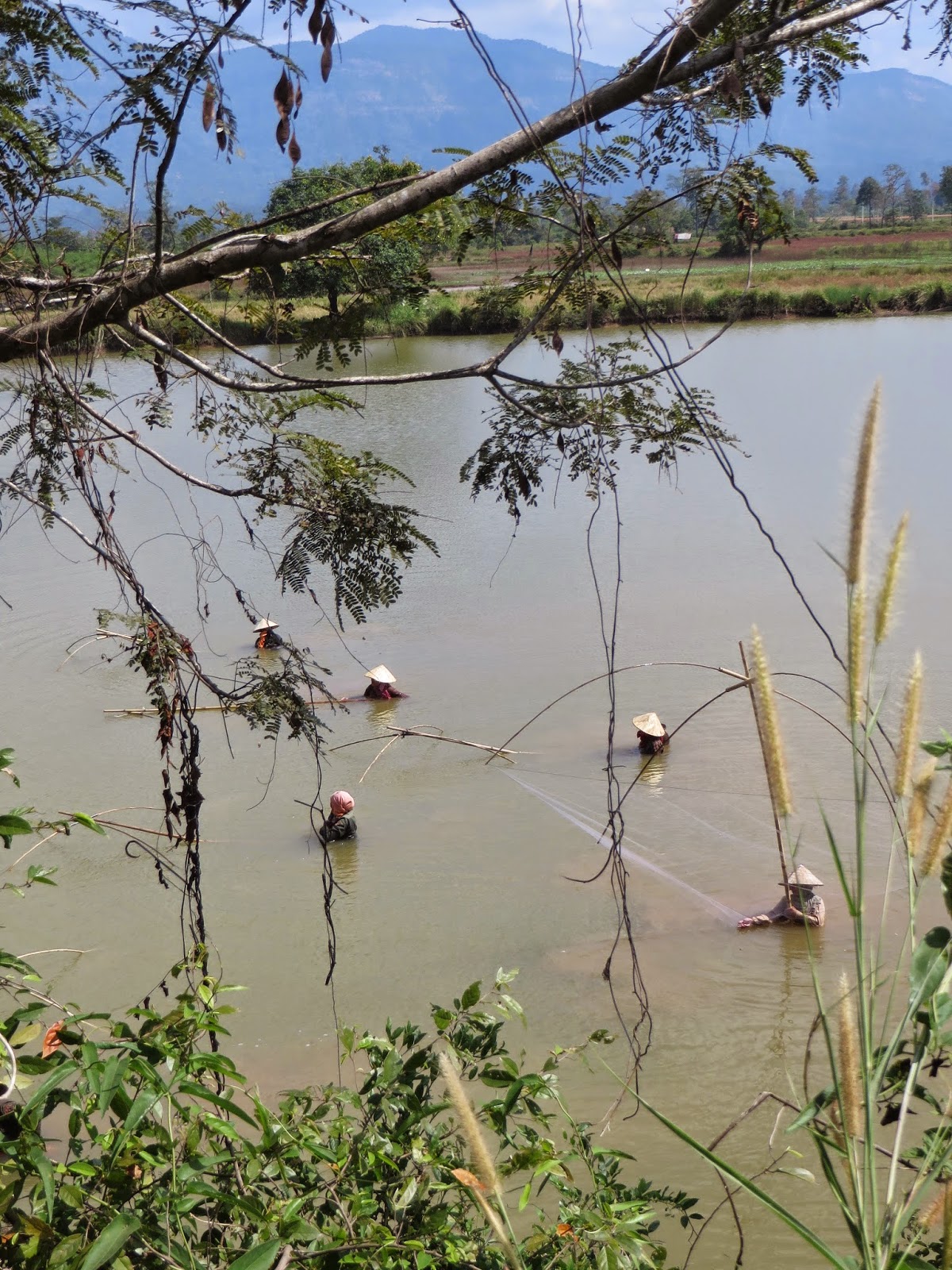 Posted by Mekong Motorcycle Diaries at 09:34 No comments:

Mekong Motorcycle Diaries
Here within are the Motorcycle Diaries outlining Mark & Jenny's road trip through the Greater Mekong region. The main objective of this adventure is Mark's PhD fieldwork, with interviews in Phnom Penh, Cambodia; Ho Chi Minh City, Vietnam; Vientiane, Laos; and Kunming, China. Starting from our home base in Chiang Mai, the whole journey will cover over 6000km through 5 countries on 2 bikes.